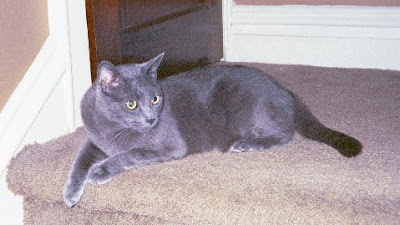 We love our animals around here. Loving your critters has its price, however. On my 37th birthday, I had to put my darling 15 year old black cat, Payton (yes, I am from Chicago!), to sleep. I adopted him from a shelter in Tucson, AZ. He was my baby before I had babies. He endured the additions of a husband, 2 kids, 2 dogs, 2 birds, and 9 moves - the worst being the last one - from So. Cal. to freezing cold Upstate NY. He killed a scorpion that had crawled into the Princess' bassinet when she was 10 days old. He slew all manner of insects, lesser reptiles, and rodents that dared to enter his domain, and in his last year, he leapt off the table and caught a bat in midair in my dining room. He had a stroke and went blind in the weeks before we had to let him go. It was horrible. We all stood together and wept at the vet's office, all touching him as he left us, and I held him in my arms, sobbing, for a few hours after he was gone.

A year went by, and I'd sworn off felines (Payton's adopted brother, Montana, had died shortly before we moved here, having been hit by a car after he escaped out a screened window...3 surgeries and $2500 later, he died anyway) forever. Did not want to commit another 15 + years only to have it end in that kind of heartbreak again. Then, one day, I went to get Wiley the Cookbook eater his medication at my vet's office. My vet works out of an old house he converted into an office. It is always immaculately clean, and I am struck by the fact that it has no animal-y smell. But this particular day, it did. BAD cat pee smell. I asked, and was told that it was free SPCA neutering day, and he'd done 12 surgeries on depressed male cats. I heard yowling from the back room.

Now, these canny vet ladies know what a sap and sucker I am...so they let me go see and pet the poor little guys. Immediately, this handsome grey face shoved out at me, alternately crying and purring. They opened the cage, and he jumped right into my arms, shaking with the combination of the effort, pain, and meds, and staring up at me with gorgeous green eyes. A young adult male, bones sticking out everywhere. I gave him some ear scratches, he burrowed his face into my hand, and from the nurses, I heard an "Awwwwww...." I immediately sensed treachery, and handed him back. They asked me if I was interested, I said NO and headed for the door.

So the SPCA calls me a week later and asks if I'd like to come visit him and make a donation. "Oh, all right."

I get there, and FIRST, they introduced me to his wife and kittens - she was a gorgeous silky black-haired thing with two little grey, and two little black puffballs, all with green eyes, nestled with her. GORGEOUS. But apparently, in addition to being the "wife," she was also Jack's mother - he was the cutest of her first litter, so they kept him, but did not spay or neuter either of them. (What did they expect?) The whole incestuous bunch were dumped at the SPCA by the disgusted owners. They were sure they'd place the babies, but not so sure about mamma kitty.

Then I got to see Jack, a few cages over. He was still scrawny, and he was wheezing. Not recovering well from the surgery, they said. He had a respiratory infection, and was on antibiotics, but was not rebounding. They'd separated him from his babies, and being a very "proud Papa," he was beside himself, being able to see but not be with them. I held him and brought him over to see the family, and he licked noses and rubbed faces through the bars. They told me he was sweet and "unusually nurturing" for a male.
Again, it was time to get out before I got involved. I'd dropped off a big bag of food and another of litter on the way in, whipped out my checkbook on the way out, and dashed for the door. "Still want us to call you if we can't place him?"
"Oh, all RIGHT!" as I fled..."and the rest of them, too."

So a week goes by. I get the call. Babies were all taken (I was pretty sad, actually, they were SO cute!), but Jack and wife were not having any luck.

"I'll be there tomorrow."

Went out, got all the supplies, and went to get the lucky couple...but Mamma had been taken an hour before by an elderly couple. So I got poor scrawny, sickly, bereft Jack.

Dogs tried to eat him, just once. (He took one half-hearted swipe at each nose and they folded). Kids came home from school and FREAKED with excitement. He stuck to me like glue, and just did not seem to be getting better. He took two more rounds of antibiotics to shake the infection, and finally started to gain some weight.

Summer came and went...then there was that wedding referred to in the "Year and a Day" post below...and Jack underwent a change. Not pleased to meet the Beloved, as he seemed to consider himself the man of the house. He became quite bold, almost protective of me. Even after the Beloved went back overseas, he remained clingy. He followed me everywhere, sat on me every time I stopped moving, and ran in front of me if the dogs came too close, staring them down. After a few weeks of this odd behavior, I awoke that fateful morning after drinking with my friends with a pair of red socks laying next to my face on the pillow. Odd. Jack was on or near me all day as I languished, sick as heck, until my friend teased me and I ran out to the drugstore for the pregnancy test. When I got home, there were four pairs of socks on my pillow, as well as one of his toy mice. I took the test. It turned blue. All became clear.

Each day, and each night thereafter, I had ritual gifts of hosiery left for me on my bed, in the bathroom, and if we were not careful to close our sock drawers or put away the folded laundry, I'd come home to a trail of socks leading me up the stairs and to my room. The record was 23 pairs. Without fail, the RED socks would be the tastiest treats left on my pillow. I have to believe he thought these were the nicest, bloodiest, and most full of protein. He slept at my feet each night (Beloved was still in Kuwait) and never left my side.
After the baby was born and while I still nursed, the sock slaying continued, but half would be delivered to me, and the other half to the floor next to the bassinet. He moved his sleeping spot to the corner of the bed closest to and right above the bassinet. He never went in it, he just stood guard. He now sleeps in the baby's room on the rocking chair next to the crib. The room is routinely filled with tiny socks, while the big socks still come to my room, just in case we have another "ugly kitty" on the way. 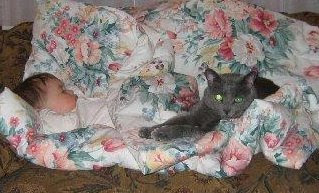 Jack is simply awesome. A bit odd with the sock fetish, but endearingly so. And he's a full, robust 12 lbs at 3 years old now. 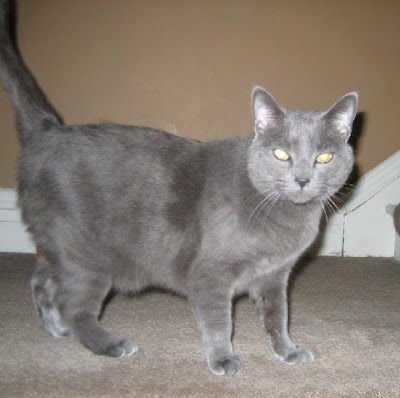 Your whole family is just gorgeous...

On behalf of Jack and his pride of furless (a.k.a., human) companions, we thank you!

Very sweet. The cat my husband and I got when we first got married just was put down a year or so ago. We had had him for about 15 years. Hubby even loved him despite being quite allergic to cats. Now we are sans pets and the kids are gaga for every dog they see. I sense a dog may be in our future, but am trying to resist for as long as possible since the responsibility would land on me until the kids are old enough to take care of a pet. Went by a pet store yesterday and it was a close one!

OMgoodness!!! My cat is your cats identical twin!!!!

SwissMiss - puppy training and potty training are not fun when done together, but barring that - get the doggie!

(Just not a tricky and sheddy yellow lab - trust me on that one!)

From what you said about Jack's family background, are you sure he isn't FLDS?

Hmmmm...he was a badly treated young male who got kicked out of the family fold for engaging in unnatural physical relations...yes, yes...you may be on to something, Father....

Oh, Jack's got some game. One of Lilli the Labradork's favorite commands is "get the kitty, Lil, get the kitty!" Which is great, but after she chases him, it is not unusual to see him chase her back.

the mother of this lot said...

Kit, that's a lovely story...and I don't usually like cats!

AWESOME!!! He's gorgeous - looks almsot exactly like my mother's cat Buddy (also known as Squishy), only B. has a small white patch on his chest.

I just want to cuddle him and nuzzle him and make obnoxious baby talk to him!!! :-p