Are we there yet?

I will post a new Helo Mom update in a day or two (I know, I know...but Larry, Kasia & I will enjoy it!). All is relatively well.

Just got back from watching my 11 y/o perform in the public school's "Winter Concert" that had not one Christmas carol. Songs about snow, "the longest night," hot chocolate, and the only C-word-containing song: Grandma Got Run Over By A Reindeer. I wanted to bang my head against the chair ahead of me and get out of there as fast as possible.
We're at 10 days until the Feast of the Incarnation. This is the first year since I married my Beloved in 1993 that we are going Santa-free. The Boy is too young, and sadly, middle school has put the lingering hopes to rest for our Little Therese. (I keep thinking of St. Therese describing her "last" childhood Christmas Eve in Story of a Soul, and its depiction in the recent Therese movie). It's kinda like that.
In many ways, it's a relief. Less ridiculous hiding stuff int he house, last minute late-night wrapping, scrambling, sneaking about, and silly overspending on toys that don't hold interest past a month. We have a respite for another year or so, then we're back at it with the Boy - and the girls are thrilled at the prospect of being big sister Santas. I will let them do it all...and just foot the bill. And that's just fine. I can't abide the crush, the crowds, even the online shopping is getting annoying. That part, I won't miss. But there are a few other things that I do like, and I do miss.
We have a small, table-top tree for the first time ever....in a family room with a 12-ft. ceiling. It's that Boy. He climbs like a monkey and he's got snake-like long fingers that are into everything. Child-locks, schmild-locks. You get the picture. We knew the temptation would be too much for him to bear, and we were right. We have the tree up and blockaded, but it doesn't stop him from trying to climb up from beneath and behind the table, chewing on the cord that he knows leads to the lights....ahhh, boys! Similarly, most of my regular decorations, like my large, beautifully painted ceramic nativity scene, are not Boy-proof and are remaining in boxes this year. I have 5 Nativity scenes - the Waterford will be the only one out, because I can fit it on the mantel where it's safe. I am a Christmas decorating diva...and all my neat stuff has to take a year (at least) off.
It's a transitional year for Christmas here by the brook. Now, Christmas morning is going to be a pure gift-exchange extravaganza - not as many surprises, none of the childhood wonderment. And I am going to miss that part - a lot.
If I could, I'd rather spend these upcoming days as follows: read, pray more, watch old movies and EWTN specials, listen to the all-Christmas-music XM channels, bake, and cocoon. But the world doesn't let me. Another concert, 2 basketball games, and a wrestling match to get through this week...and then Friday's my last day at the office, which is bittersweet for me.
So I'm in a mini-funk, and it's mostly because I can't wait for the secular, stressful side of Christmas to be over.
It will get better once the kids are out of school and we have a nice, 2 week long CHRISTMAS - not "Winter" - vacation.
Hurry up, O Antiphons! Hurry, Baby Jesus! I need to think about You more and the world less...nothing restores the "wonderment" of Christmastide more than that. 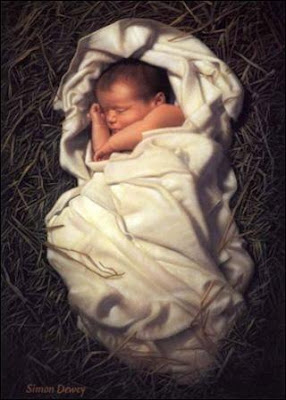 You mean....you mean there ISN'T a Santa Claus. Oh man, you gotta be kidding me!