I need them. Every time I hear the words "President-Elect Obama" I have this immediate urge to either throw things at the tv, rip out the car radio, or engage in an impromptu primal scream therapy session. (<--This would scare the baby.) So I think I need to find some earplugs. .

After yesterday's leaks to the press regarding The One's meeting with Bush, the stats saying that 72% of us believe The One can fix the economy, the re-emergence of Farrakhan and Wright to discuss The One, and the overall cockiness of The One and his entourage..... 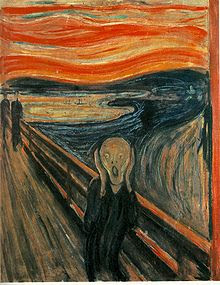 I may have to give up all external media until America sees the light.
Posted by Kit at 8:31 AM

For the sake of my nerves I'm avoiding network news altogether.

I am even thinking of ditching blog reading for awhile (but I know that would only last maybe 14 hours...)

Or you can be like Harry Potter and call him "He Whose Name Shall Not Be Spoken."

Ohhh...Larry, you are provoking me to decidedly un-Christian thoughts...I am going to have to go to Confession... :-p

He's president elect Hussien until I otherwise feel like changing it...that being said, the ridiculous amount of cockiness is getting to my nerves, which is why I've come up with a great solution....fines of a dollar for all my students who mention p-e Hussien's name in class, I get a profit, i avoid hearing the news, and I get a great laugh out of it ;), lol.