Otherwise known as St. Didacus, celebrates his feast day today, and is the namesake of my former hometown. San Diego was a Franciscan friar and recluse, who eventually came to care for and effect seemingly miraculous cures for his patients (convent and monastery fellow religious.)

The Mission San Diego de Alcala is the oldest in California, founded by Bl. Junipero Serra in 1769. The site of the mission changed due to earthquakes and fire over the years, and it fell into disuse and ruin from shortly after the Civil War until the early 20th century. 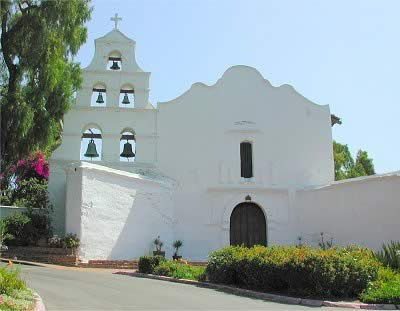 After its restoration and renovation, the Sisters of Nazareth (from Ireland) began an orphanage and boarding school attached to the Mission. It is a beautiful site and a great school - my girls attended before the Beloved's retirement and our move to NY. Two years ago, the Sisters' decades-long tenure ended and Nazareth School was taken over by the Diocese.

If you're in the area and have an hour or two to tour gardens, check out the museum and attend Mass, it's a lovely place to spend a Sunday afternoon.
Posted by Kit at 5:10 AM